The Croatian Academy of Sciences and Arts has organized over one hundred scientific meetings and conferences, evaluating works of important Croats throughout history. In addition, it has organized a number of symposia focusing on the history and economic development of Croatian regions, cities and towns, as well as on the problems of Croatia's development. 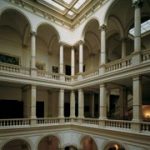