The Scientific colloquium of the UEAA, Paris, 12 October 2016 has taken place back to back to the 9th General Assembly of the UEAA held on 11 October 2016 in Paris . In addition, there was the possibility for the attendees to participate to a tour in the region of Champagne on 13 October 2016 which was organized by the Académie d’Agriculture de France.

During the G A, two resolutions were passed: one on the Position of the UEAA – approved by the Board – on the regulation of targeted mutagenesis in Plant Breeding and one on the creation of a UEAA Commission “Technical Agricultural Education”.

You will find them here attached 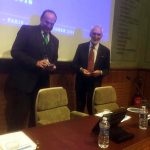